What Is Cortec® MCI® Technology?

How Does This Corrosion Prevention Technology For Concrete Structures Work?

MCI®s are based on amine technology (amine alcohols and amine carboxylates). They are classified as mixed inhibitors, meaning they affect both anodic and cathodic portions of a corrosion cell. MCI® is applied in many forms including as a concrete admixture or a topical treatment. It moves as a liquid through the concrete matrix via capillary action and migrates in a vapor phase throughout the concrete pore structure. When MCI® comes in contact with embedded metals, it has an ionic attraction to it and forms a protective molecular layer. This film prevents corrosive elements from further reacting with the reinforcement and also reduces existing corrosion rates, greatly extending concrete service life.

Increasing Service Life Up To 30 Years For Sustainable Construction

Sustainable construction has become a goal for owners across the globe. While much attention has gone to reducing cement use and minimizing power and water consumption, an often overlooked aspect is the durability and service life of the final structure. However, this is undoubtedly one of the key parameters influencing structural sustainability. By using MCI in severely corrosive environments, structures will have a stronger resistance to corrosion and therefore possess greater durability. Increased durability will mean fewer repairs, greater structural integrity, and a longer service life, all leading to greater sustainability. MCI is made from a renewable raw material, enabling users to earn certain LEED credits. It is an excellent addition to building projects around the world seeking to meet sustainability standards such as the Estidama Pearl Rating System and BREEAM.

Most Popular MCI® Products We Offer

MCI can be applied to existing structures as a surface treatment that reduces corrosion rates. This surface treatment is designed to penetrate into and migrate through cementitious materials to reach and protect embedded reinforcing metal. MCI surface treatments can be applied on vertical and overhead surfaces, as well as horizontal surfaces. MCI pure inhibitors do not contain water repellants but provide extra-strength corrosion protection to embedded rebar through a powerful dose of MCI inhibitors. These straight inhibitors work at rebar level to effectively protect reinforcing metal from corrosive elements with or without the use of sealers.

MCI sealers combine water repellency with the added protection of Migrating Corrosion Inhibitors. These MCI surface treatments seal surface pores to block carbonation and protect against the ingress of water, chlorides, and other aggressive contaminants. Below the surface, MCI® penetrates to the depth of embedded metallic reinforcement to form a protective monomolecular layer on the surface of the rebar. This protective layer delays the onset of corrosion and reduces corrosion rates after initiation, greatly extending the service life of structures.

Several MCI materials have been tested according to U.S. Bureau of Reclamation M-82 Protocol. The MCI materials were applied after 10,000 Coulombs of corrosion was reached in test slabs. This is the criteria used if the performance of the surface applied repair does not depend upon the amount of chloride present at the reinforcing bars, or if protection at a higher initial chloride content level is to be demonstrated. All materials tested were found to significantly reduce corrosion and cracking at a high level of chloride exposure.

MCI-2020 is a surface applied, migrating corrosion inhibitor designed to penetrate through cementitious materials including concrete, mortar, and limestone. MCI-2020 migrates in both liquid and vapor (gas) phases through the pore structure, forming a protective, molecular layer on embedded reinforcement. MCI-2020 provides corrosion protection against carbonation, chlorides, and other contaminants. MCI-2020 V/O is a high viscosity version of MCI-2020 which is specifically designed for vertical and overhead applications.
Advantages

• Protects against corrosion caused by carbonation, chlorides, and other aggressive contaminants
• Effectively reduces corrosion rates on metals with existing corrosion
• ANSI/NSF Standard 61 Approval for structures containing potable water
• Water based and non-flammable
• Does not etch, stain, discolor, or otherwise harm glass, metals, or automotive paint
• Does not contain calcium nitrite
• Does not contain wax
• Does not require removal of sound concrete
• Allows vapor diffusion (not a vapor barrier)
• Easily applied by spray, brush, or roller
• Minimal curing time, traffic may resume minutes after application if necessary (dry to touch)
• Migrates independent of orientation (horizontal, vertical, overhead)
• Migrates up to 3 inches in 30 days
• Proven performance in both lab and field testing
• MCI-2020 V/O available for vertical and overhead surfaces

Time and time again, MCI® corrosion inhibitor products are shown to outperform the competition. Other admixtures rely on pore blockers or are limited by a chloride threshold. In contrast, MCI® specialty admixtures added to concrete work independently of chlorides, protect even when cracks occur, and can actually delay setting time of concrete for better workability. They do not affect the physical properties of concrete mixtures when used at the recommended dosage rates.

MCI® concrete admixtures have been tested according to many ASTM standards. MCI®-2005 NS and MCI®-2005 AL have been shown to meet ASTM C1582. These materials met corrosion requirements according to extended G109 testing included in ASTM C1582, and treated samples did not even begin to show corrosion until approximately 20 cycles after the control began to corrode. In addition, MCI®-2005 NS admixture technology has shown superior corrosion protection compared to both CNI and Amine/Ester concrete admixtures when undergoing intense cycles of saltwater ponding on cracked concrete beams in modified ASTM G109 testing (cracked beam testing).

MCI®-2005 is a water-based, organic, corrosion inhibiting admixture for protection of metallic reinforcement in concrete structures. When incorporated into concrete, MCI-2005® forms a protective, monomolecular layer on embedded metals that inhibits corrosion. In new construction, this is quantified by an increase in critical chloride threshold and subsequent reduction in corrosion rates when corrosion does initiate. When used with repair mortars and grouts, MCI®-2005 not only protects rebar within the patch, it is able to migrate into undisturbed concrete adjacent to the repair, to protect reinforcement already in place. MCI®-2005 has been awarded the USA BioPreferred ™ designation (www.biopreferred. gov).

MCI-2005 NS (normal set) is a liquid concrete admixture, that doesn't affect setting time, and protects steel reinforcing, carbon steel, galvanized steel and other metals embedded in concrete from corrosion induced by carbonation, chloride and atmospheric attack without changing the set time of most concrete mixes. MCI-2005 NS protects by a time-proven migratory corrosion inhibitor function. In addition, it contains a proven contact inhibitor. When incorporated into the concrete mix, Migrating Corrosion Inhibitors (MCI) seek out and form a corrosion inhibiting protective layer on metals. When used with repair mortars and grouts, MCI-2005 NS will migrate to undisturbed concrete providing effective corrosion protection to rebar already in place. 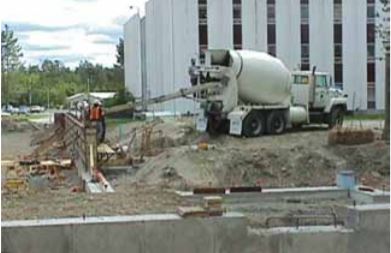 MCI-2012 IntegRepel is a concrete waterproofing admixture designed for protection of steel reinforcement in concrete structures. MCI-2012 IntegRepel contains time proven Migrating Corrosion Inhibitors (MCI) and simultaneously reduces ingress of water and other corrosive elements into concrete, enhancing the corrosion protection properties. It is particularly suited for use in structures exposed to corrosive environments.

MCI-2012 IntegRepel differentiates itself from other waterproofing admixtures by providing a dual approach for corrosion protection. First, it provides direct protection to embedded reinforcing steel through the addition of Migrating Corrosion Inhibitors (MCI). MCI are organic compounds that are considered ambiodic (mixed) corrosion inhbitors – meaning they provide protection to both anodic and cathodic areas of a corrosion cell. MCIs form a self-replenishing layer on embedded reinforcement, delaying the onset of corrosion as well as reducing corrosion rates after initiation. Second, MCI-2012 IntegRepel reduces the ingress of corrosive species with its waterproofing component.

Ordinary concrete absorbs water and dissolved salts through its network of pores. By significantly reducing the absorption of these materials into concrete and by providing protection directly to the steel, MCI-2012 IntegRepel significantly increases the useful service life of structures.